We lost her, the only teacher in the primary school of A’kuang village

9th of June, Monday, rain. The new week began, students in A’kuang village primary school —— one of Free Lunch program schools in  Xinhuang County, Huaihua city, Hunan Province——could not take classes as normal, as their only teacher Yufeng Wei passed away at night of June 6th due to fulgurating Myocardial infarction. 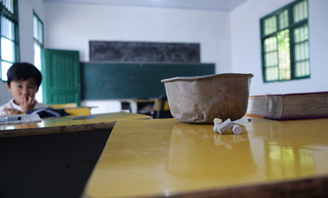 “Treating the illness” by herself

Two days earlier at Friday morning, Yufeng got up early, intending to plant the long beans before classes, however, this had to be relinquished because her thorax suffered tortua suddenly. After arriving at school, she tried to hold a reviewing test for students, but the pain in her thorax got worse. She held her arms to the dais, with her body ceaselessly shaking and her face being seriously pale. The village Party branch secretary came rushing in, handing out the Chinese test papers and informing Yufeng’s son Xueqiao Pu by phone as well. In fact, as early as one month ago, Yufeng experienced the symptom of continuously pain in chest, but no one could persuade her to see a doctor.

Acute Myocardial Infarction (AMI)! Switching from a town hospital to a county hospital, Yufeng’s heartbeat gradually faded away at that midnight. Her 31 year-old son Xueqiao knelt down to beg doctors not to stop rescuing, although Yufeng had been given Ecg recovery for 4 times, she had no reaction at all and the hospital eventually issued a death notice. Yufeng Wei passed away, with her 52 years life. Based on diagnosis, she suffered overwork-caused Acute Myocardial Infarction, and the deeper malaises are lack of diabetes treatment for years as well as overwrought lifestyle.

Two days later, when Xueqiao went through his mother’s things, he found that herbal medicines she picked almost covered half of the house. “Attempting to save money from buying (western) medicines, she started learning from medical books about how to decoct the Chinese herbal medicines two years ago.” Xueqiao added, he has been an uremic patient during the past 4 years, and he still keeps taking medicines so far, what is worse, his father suffered a serious stomach bleeding and became completely bedridden; in order to take care of the family, his mother Yufeng had never taken a day off, and even never been to the hospital, as she chose to "treat the illness" by herself.

Since last year, Yufeng’s illness of stomachache and stethalgia had been more and more serious, “(she) had to stop to rest even though she climbed up for just dozens of meters”, but the responsibilities, including taking care of the family and educating her students, urged herself not to leave them off. Hence, she controlled her disease only by her self-made herbal medicines, which made things worse. 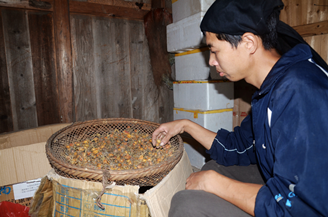 She’s little son Xueqiao was clearing up his mother’s herbal medicines, which were picked and made by Yufeng herself based on the knowledge of medical books.                  Photographed by journalist Yi Li

Yufeng went away, leaving her nearly 70-year-old husband who suffers from gastropathy and has some trouble with walking, her little son who has the illness of uremia and is not able to do the physical work, as well as her 19 students who she was always concerned about……

The new week began, Yufeng would not appear in a’kuang village primary school any more. It happened so suddenly, and she even had no time to say “goodbye” not only to this familiar little schoolyard, but also to students she got along with day and night.

A fellow journalist suggested students to bid farewells to their teacher through a single sentence:

“I feel that teacher Wei was so valiant, and she never exposed her sufferings towards us." Second-grade Lan Yang wrote.

“I really appreciate her, as she conveyed various branches of knowledge to us.” Hongling Pu in grade two wrote.

“Teacher Wei, I don’t want you to die.” Wrote by first-grade Zhizhen Yang.

“Dear teacher Wei, I sorely miss you.” Wrote by Man Yang also in grade one。 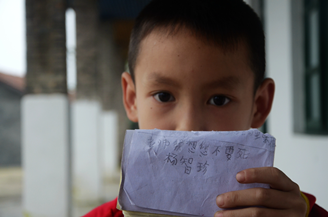 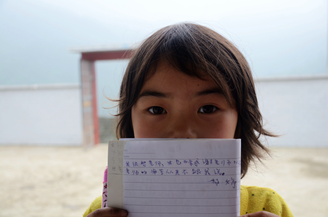 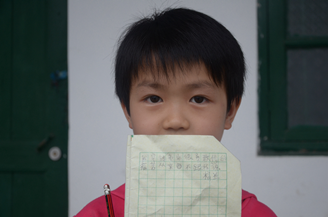 9th of June, students in the primary school gathered in Yufeng’s home to send their condolences, leading by the Director of the village women Guizhen Yang. She told to the journalist that Yufeng often bought her students stationeries and snacks, tutored their homework in her home after school, or give tutorials by visiting their home. Villagers all felt “very relieved” for leaving their children to Mrs. Wei. There was a tendency to cancel this primary school, but because of villagers’ collective bargaining, the school was eventually retained, and Yufeng kept teaching as well. Although she was a substitute teacher and only had very low wages, she never cared about that, as she did not have to leave the class and her dear students.

At June 9th, villagers constantly came to the mourning hall, all sending their condolences. The date to hold Yufeng’s funeral procession has not been determined yet, while many parents have agreed to stay by her up to the grave.

In the gloomy central hall, Yufeng’s coffin stayed silently. Her deadee has not been prepared because all are in a hurry, but people who saw her off would definitely remember her appearance, and the busy figure of this hardy village schoolteacher.

The word appeared most was “thanks”

7th of June, when Mr. Fei Deng, the initiator of Free Lunch, was informed of Yufeng’s death, he immediately arranged for staff to visit Yufeng’s home to express sympathies, ask about her family situation, and help to look after her families. “All teachers in Free Lunch schools are our companions, and we must be grateful for each of them”, Mr. Deng says.  The Free Lunch program is a public donation plan initiated by 500 journalists including Mr. Deng and dozens of domestic mainstream media, together with China Social Welfare Foundation (CSWF). It proposes to donate ￥3 everyday in order to offer free lunches to students in poverty, and A’kuang village primary school is one of the program schools.  Up to now, Free Lunch program has been applied in this school for nearly 3 years, during which Yufeng was responsible for microblog management, account record as well as meal arrangement.

In the officially recognized Sina microblog named “A’kuang primary school”, information was published about every free lunch in nearly 3 years. Every microblog earlier than June 5th was published by Yufeng herself. One of the microblogs at May 31st, 2014 said, “….recently, so much things need to be dealt with both at school and home. I am in poor health, and I feel very tired at night, hence I haven’t tweeted for a long time…..” At that time, Yufeng already felt extremely uncomfortable, Xueqiao recalled.

However, in the official microblog “A’kuang primary school”, apart from published information about Free Lunch, the word showed up most was “thanks”——

“My son has been at the doctor’s in Provincial People's Hospital, thanks to Free Lunch! Thanks to the help of 15 kind-hearted people!

Without your support, he could not have the chance to visit medical specialists. ”

“I feel very grateful for Free Lunch！Thank Bank of Changsha for conti-nuous efforts they paid!  The support from China Siyuan Foundation For Poverty Alleviation (CSFPA) cannot be given without help of Bank of

Changsha, my son’s disease is able to be cured soon. My families andI really appreciate every caring people who sent us concern and help!

You are all my benefactors! Wish you happy New Year! Happy everyday! Everything goes on satisfactorily!”

“Thanks for philanthropes! Thank Xu Chen! Thank Jian Mo！Thank Fei Deng! Thank Xiaowan Lan! Thanks for volunteers! Thanks for all kind-hearted people! With your love, the children in the mountains will not get starved and feel freezing! They appreciate all well-meanings people!

“We never forget donation from community of caring people, in the disease risk period of my son, we were helpless and did not have enough

money to treat him, just in May in this year, Bank of Changsha donated more than twenty thousand Yuan to me, by which help my son get thr-

ough the critical dangerous moment. Bank of Changsha saved my son’s life. It also saved my family. We will engrave our benefactor, and always

be grateful! Although I can never repay you, the world is moved by your kindness!”

Love will be responsible for her family after her leave

Xueqiao Pu, the son of Mrs. Wei, posted in June 7th: thanks for your care and support to both the school and my family. What my mother

worried about only were her students, her sick and aging husband and her ill son——me. Of the period, her chest pain was so serious that she

nearly could not keep her legs, but she insisted on assigning homework before went to hospital. I believe that if she could see so many good souls

still persist, she shall feel relieved to leave.

In 9th June afternoon, Free Lunch staff arrived at Yufeng’s home. As the funds of Free Lunch can only be applied for free lunches of rural kids,

it cannot offer relevant financial aid to Mrs. Wei and her family, and staff can only express their caring personally. Free Lunch staff then laid a wr-

As early as April 2013, Yufeng was honored with the title of“the Best Teacher of the Year” in Free Lunch schools. In charity dinner party for

Free Lunch Second anniversary, she even received a special present——a donation of ￥ 220061 through platform of CSFPA. This donation

intended to help her son of uremia and her poor family, containing 17 donators including Zi Gang, Manzi Xue, The mage Yancan, Tong Meng,

At the same time, CSFPA’s execution of salvage was performed under the criteria of “Openness, Transparency, and Normalization”. It did not charge for any management expenses. All the funds were used in the medical care of Yufeng's son Xueqiao Pu, and the cost of teacher Wei's domestic living costs. Additionally, as a result of communicating between the donors and Yufeng, an agreement had been reached for the allocation of funds: firstly, according to the requirements of Xueqiao's medical treatment, the corresponding fee shall be allocated to the hospital automatically, or, in line with the charge of buying medicine, it would be remitted to Yufeng’s own bank account.; secondly, as a standard of living costs, ￥ 800 would be remitted to her bank account monthly. Moreover, after hearing about Yufeng’s death, CSFPA appropriated  ￥ 10000 immediately to assist in the last duties to the dead. Because of Yufeng’s death, her family almost lost their source of income. Hence, after integrating the donors’opinions and local living standard, CSFPA increased the standard of living costs to ￥1500/month. Meanwhile, the medical care of Xueqiao will be continuously ensured till the donation's empty out. By then, if the family needs further assistance, CSFPA may give further support as appropriate. Based on criteria of medical expenses and living costs from 2013 to 2014, the donation can afford Mrs. Wei’s family for more than three years after her departure, if no urgent cases would be happened. 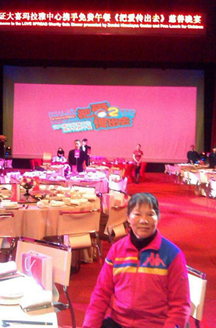 The photo shows Yufeng attending the charity dinner party for Free Lunch in April, 2014, Shanghai, one of the few photos during her lifetime. 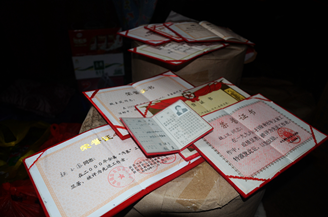 Xueqiao Pu cleared up her mother’s belongings, finding a heap of certificates

Those people who had taken teacher Wei's kindness, are also bestowing the same favor for the broken home, or as the common saying, are show-ing consolations for the spirit of the deceased.

May teacher Wei stay in peace!

Annotation: the list below shows the caring people, who donated for Yufeng’s sick son and her family through CSFPA.